Start Building Your Dream from Nature with Lake Country Log Homes. Located in beautiful British Columbia Canada, we are the premier developer of Handcrafted Log and Timber Frame homes. We pride ourselves with our extensive capabilities, quality of service and superior craftsmanship. We know that it takes more than good supplies to produce a quality home. It also takes heart and a genuine love for the art of log home building. We are committed to being a leader in building beautiful, energy efficient and sustainable homes that are not only aesthetically appealing but comfortable to live in. We can guide you through the complexity of building your own custom home. Whether it’s a Western Red Cedar character cabin with flared butts, a Douglas Fir home or another premium log and timber choice, we will take great pride in every aspect of the building process: from your custom designed blueprints to the careful handcrafting of your log and timber package.

This website contains a wealth of tools and information designed to inspire and empower you during this exciting process. For example, our extensive photo gallery provides a truly unique view of our manufacturing and construction process. You will be hard pressed to find similar content elsewhere that shows so much of how BC trees are crafted into beautiful buildings for families and communities. There are also hundreds of photos showing a wide array of finished log buildings: from the small and functional to the grand and luxurious. Do you need to see details and measurements while clarifying the scope and nature of your dream home? Then please spend some time looking at our floor plans! There is plenty of content there to help move your vision closer to reality.

Generations of family pride and history are what make Lake Country Log Homes (LCLH) so passionate in helping clients build their custom Handcrafted Log or Timber Frame Cabin Home. Whether it is for a Western Red Cedar Character Log Cabin with Flare Butts, Western Red Cedar Log Cabin Home, Douglas Fir Log Cabin Home or other premium Log & Timber choice, we will take great pride in every aspect of the building process: from your custom designed blueprints to the careful selection of your Log and Timber Package. With so many years in combined family experience, we can assist you with anything you can imagine or desire. We will create the Log Home, Cabin or Cottage of your dreams!

What People Say About Us

"Artisans who take pride in their work."

"We have to thank Lake Country Log Homes for their skill and expertise."

"Nobody from the other companies responded that quickly"

"Our cabin turned out amazing!"

"Didn't have hidden costs and bait and switch techniques."

"Our new home is spectacular."

"Crafstmanship and attention to detail throughout."

"A professional yet personal style of service."

"Treated us as family."

"Helpful with every decision we had to make."

"The craftsmanship is excellent."

"It has been a great pleasure to work with LCLH in building our lovely home!"

"They created a truly outstanding facility."

"(LCLH) creates and delivers a superior product in every way."

"Their professionalism extended all the way to the final product."

"We were delighted at how things came together." 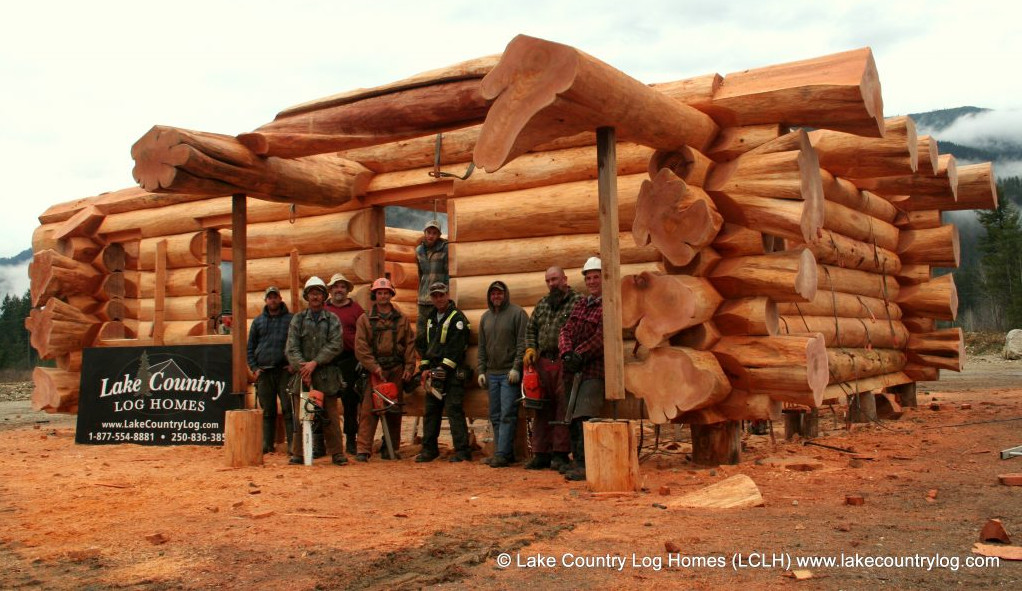 Contact us today
Let’s discuss your vision and plan your upcoming project.
We look forward to working with you!

We now have family in Canada!

It was early in the morning the day that I first visit Lake Country Log Homes. The office was still closed but a friendly giant guy in the yard helped me and told me about the company and their product. The giant guy was Allan Onsorge, he is the guy that is setting up houses for Lake Country all over the world. I was very impressed because it was not only one crane and a little office, this was a very professional company. Later that morning I met Jamie Gervais and I had a very relaxed conversation with him and I directly had a good feeling in this company. I gave Jamie the same drawing that I gave all the other companies. So a few days later my wife mailed me from the Netherlands and told me that she had an quote from Lake Country and nobody from the other companies responded that quickly and nobody could beat the price of Lake Country.